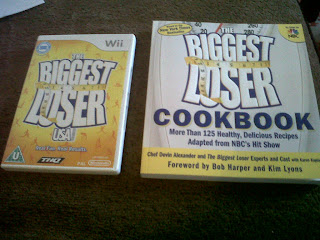 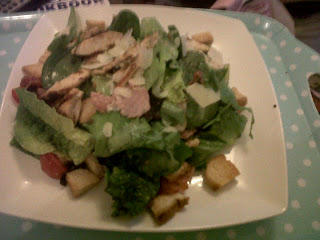 Phew busy few days. After breakie I had some cupcakes to decorate and deliver. I also dropped some off at the vets as one of my bunnies has flystrike last week and nearly died but the vets did a fab job. I also made some to take to our new neighbours later.

After dropping off cakes I went to my parents to do some work for my dad ( I have no internet until next week so had to use his computer). Then popped to see my sister as she passed her driving text- yay! I was starving when I got there so had a bowl of soup and bread.

Dinner tonight was chicken and bacon salad. So yum.

My biggest loser cookbook and wii game arrived today. I'll let you know what I think- anyone used them?

Reason I'm looking for tomorrow- I've booked a tranquillity day for myself. I've been super busy and stressed and my oracle cards keep telling me to get some tranquillity and when I went to a spiritual medium last week she said the same. So I plan to have a lay in. Have a nice breakfast and lunch. Read some books, have a bath and pamper and maybe watch a film. Going to turn my phone off so no distractions!!

When was the last time you took a day just for yourself?

Jess xx
Sent from my BlackBerry® wireless device
Posted by Jessica at 11:04

Jessica
I'm Jess. I live in Willow Cottage Oxfordshire with my partner Phil, 2 cats and 2 house rabbits. This blog is about cooking, baking, crafts, my obsession with all things vintage and just about anything else! This is a new blog so please bear with me :-) I also run my own cupcake business www.jessicascupcakes.com